0
Share
I’ve noticed lately that our country is highly polarized.

No, I’m not referring to social media or cable news. I’m thinking about the great divide between Baby Boomers and every other younger cohort on the topic of inflation risk.

Many of us graduated college into the jaws of 1970s “stagflation” (a terrible-sounding word describing a stagnant economy with high inflation) and watched our grandparents’ pensions, paid in nominal dollars, slowly disappear over two decades as they aged. It was common to hear them say, “We’re living on a fixed income” but they were not — they were living on a disappearing income in terms of purchasing power.

Fast forward to 2019 and a GenX’er recently suggested that we “old-timers” have too much fear of the “big bad inflation wolf.”

I have no idea whether inflation rates the likes of which we experienced in the 1970s and 1980s will reappear anytime soon. Long-term inflation is unpredictable. I hope the GenX’er is right but I’m not willing to bet my retirement that he is. High inflation can be catastrophic and when we plan for retirement we should take catastrophic outcomes off the table when we can.

Inflation peaked at over 13% in 1980. I had a 14% mortgage.  Inflation rates were even higher in earlier decades. But annual inflation is a snapshot. Prolonged inflation is the real monster.

I stumbled across the following chart recently at inflationdata.com[1]. It shows historical annualized inflation rates by decade. Inflation for the decades of the 1970s and 1980s averaged 7.25% and 5.8% per year, respectively. Again, much lower than the annual peak in 1980 but destructive in its persistence. 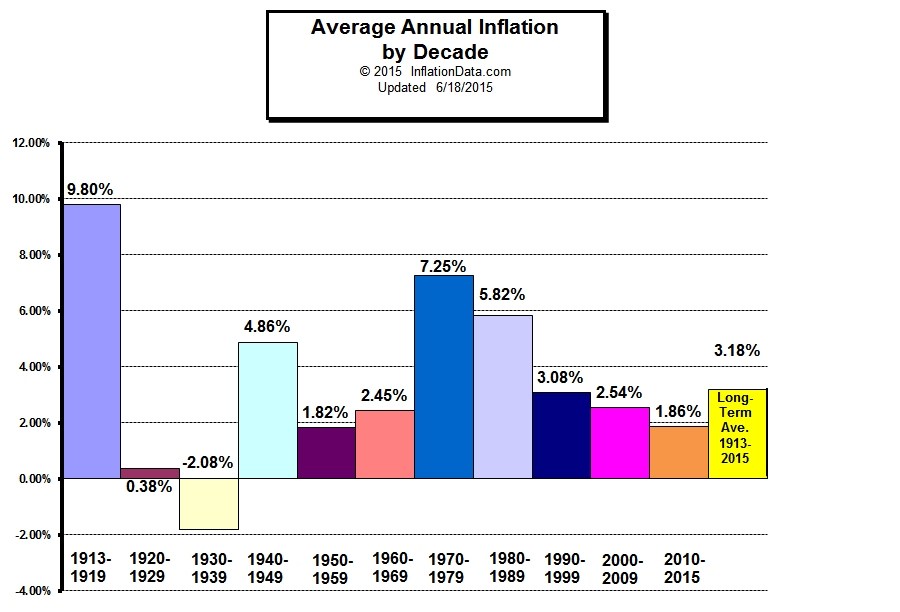 Notice that periods of high inflation come and go with no regularity. Also, notice that the high inflation of the 1970s and 1980s was immediately preceded by very low inflation in the 1950s and 1960s. No one saw it coming.

We sometimes speak of high inflation rates as “tail risk” but four of the previous eleven decades experienced average annualized inflation significantly higher than the long-term average of 3%. We haven’t seen high inflation since the 1980s so we’re probably experiencing recency bias.

There are a number of ways a household can mitigate inflation risk. I will write about one, CPI-adjusted annuities, soon. In the meanwhile, you can read a paper that economist, Zvi Bodie and I recently co-authored on that topic[2].

Buying TIPS bonds instead of nominal bonds is a near-perfect inflation hedge that transfers inflation risk to the U.S. Treasury. Your home equity might keep up with inflation. Social Security benefits are inflation-adjusted.

Although stocks are commonly referred to as an inflation hedge, they are not truly a hedge because real equity returns are not correlated with inflation. Stocks typically perform poorly in times of high inflation. Rather than “protect” against inflation they more or less “eventually outrun it”, which is fine if both you and your portfolio survive long enough.

Economist, William Sharpe was recently quoted on this great divide. “I realize that it is hard to make the point that inflation can get out of control with the generations that grew up after the early 1980s, but perhaps we can point to other countries in more recent times, then ask them whether they think we are virtually guaranteed to have low and relatively steady rates of increases in prices for the rest of their lives.”

It’s a good question to ask yourself or your advisor.

In my next post, The Real Cost of Nominal Annuities, I’ll share some thoughts on hedging inflation with CPI-adjusted annuities.

How to Attract Birds to Your Yard (Hint: Don’t Just Wing It)

Satisfying Retirement In A Changing World: Publication Has Ceased

Know When To Fold ‘Em

RVing in Wine Country” What a Tremendous Trip

Satisfying Retirement In A Changing World: A Summer Challenge With The Grandkids